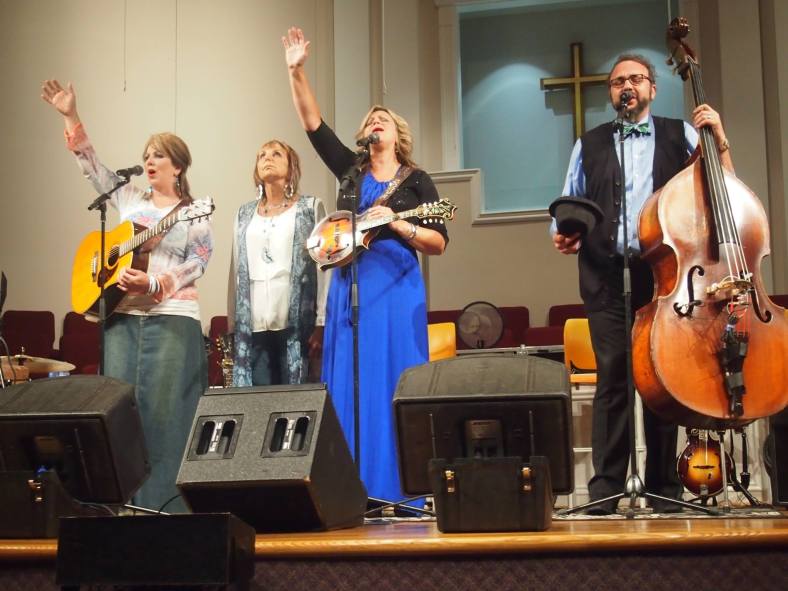 The Isaacs in concert at Sand Spring Baptist, Lawrenceburg, in 2015.

Isaacs to pack em in at Sand Spring Baptist

(Note: This story about one of my favorite music groups appeared in the July 8, 2015 edition of The Anderson News.)
By John Herndon

One of the biggest names in Nashville will be performing Friday night, July 10, at Sand Spring Baptist Church.

The Isaacs, a world-renowned acoustic group, will be the headliner as part of the Sand Spring Gospel Concert series. Also performing will be The Shireys, another family group from South Carolina which has become a local favorite at Sand Spring.

The program begins at 7 p.m. There is no admission charge but a love offering will be taken.

The Isaacs have been traveling in full-time ministry since 1986, according to Lily Isaacs, who along with her three children – Becky, Sonya and Ben – make up the group that has won numerous Dove Awards from the Gospel Music Association. The Isaacs have also been nominated for several Grammys.

The Isaacs strive to bring a message of hope based on their own life experiences, Lily said in an email. She was born in Germany to Polish Jewish survivors of The Holocaust. The family moved to New York when she was 2 years old. At age 35, she was diagnosed with breast cancer but beat the dreaded disease.

“I certainly hope that our ministry is an experience of hope,” Ms. Isaac said. “Through all of our personal trials and victories, we’ve tried to incorporate this message in song and testimony. Of course, this includes my my history with my parents as Holocaust survivors and my battle with cancer.”

Lily Isaacs is now a 31-year cancer survivor and her fight was the inspiration for perhaps the group’s most well-known song, “I’m Gonna Love You Through It.” Written by Sonya Isaacs, her husband, Jimmy Yeary, and Ben Hayslip, the song was a major hit for country music superstar Martina McBride. The Isaacs perform the song extensively.

When the idea for the song came about, Lily says, “they called me and asked some very personal and soul-searching questions. The next day, (Sonya) sang the song to me. I was deeply moved and I know the song has been a great blessing to millions of people world-wide.”

The words to the chorus say,

When you’re weak, I’ll be strong

When you let go, I’ll hold on

When you need to cry, I swear that I’ll be there to dry your eyes

When you feel lost and scared to death,

Just take my hand, together we can do it

I’m gonna love you through it.

While “I’m Gonna Love You Through It” is perhaps the most well-known song to originate with The Isaacs to make it big on the country charts, it is almost impossible to put the group in any one category. Their repertoire includes country and bluegrass the Isaacs often appear at the Grand Ole Opry. The group is most well-known for its work in the gospel music industry and is a regular feature on the Bill Gaither Homecoming series and the concert schedule is loaded heavily with appearances in churches.

“I’m not sure we can be labeled as bluegrass or country or gospel, only,” Lily says. “We actually are more Americana, in my opinion. We’ve had many opportunities to perform in many different genres. I feel like this happens because we are not concerned about being categorized. We just write songs and arrange them the best way they sound. Our family writes songs about real life issues and that’s gospel music to me.”

This week’s schedule underscores Ms. Issacs’ assessment. Sunday, the group was to have played at the Brooklyn Tabernacle in New York. Thursday, the Isaacs are scheduled to play at the Bill Monroe Memorial Park in Bean Blossom, Ind., before heading to Lawrenceburg on Friday.

The music is full of variety, from “I’m Gonna Love You Through It” to a spine-tingling version of the old hymn, “I Must Tell Jesus” to the bluegrass standard, “Daniel Prayed,” to a fun adaptation of the Bing Crosby-Andrews Sisters hit from 1944, “Accentuate the Positive.”

Recently, the group was asked to sing at the funeral for country star Jim Ed Brown.

“We befriended Jim Ed Brown by being on the Opry over the past 20 years,” Ms. Isaacs said. “He was a wonderful person and good friend. When the family requested that we sing at his funeral, we were humbled. We recorded (Brown’s hit) “The Three Bells” on our “Naturally” CD and have had the opportunity to sing this song with him on the Opry stage several times.”

The Isaacs last appeared in Lawrenceburg when they packed the house at Sand Spring last January. Another full house is expected Friday.

“We always enjoy coming to Lawrenceburg, Ky.” Ms. Isaacs said. “We hope to have a wonderful time of praising God and enjoying fellowship.”