There might not be any singing group in any musical genre with a name more fitting than His Heart.

“We want to be four guys that God can be proud of,” says Bill Sowder, the founder of the popular Southern Gospel quartet based in his hometown of Mt. Vernon, Ky.

The enthusiastic audiences that fill His Heart concert venues would say the quartet is just that as it edifies and challenges listeners with mix of old gospel standards and more recent works. The quartet is a mix of music veterans and relative newcomers all with the same purpose of being people God would be proud of. 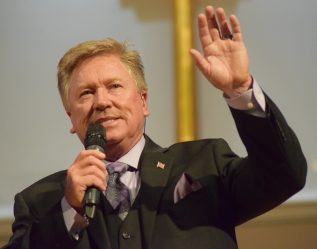 Bill Sowder,a gospel music veteran, fulfilled a dream when he put His Heart together in 2010.

It all began with a dream.

Sowder, a smooth baritone, has been well-known in his home through his 37 years in the finance industry and as the public address voice of the Rockcastle County Rockets basketball teams. And he’d become a fixture in statewide music circles as a member of two different winning groups in the annual gospel quartet contest at the Kentucky State Fair.

But  his dream was to organize his own Southern Gospel group. After much outside encouragement, including some from renowned pianist Roy Webb, the dream came to fruition in 2010.

“My mission is to give 110 percent to this,” Sowder says.

In eight years, the group has experienced its share of victories and struggles. As is the case with most any group, there have been changes in personnel with the current lineup being together about three years. His Heart has never lost focus on its mission and the current group is quick to note a common belief that divine intervention led them down various roads to His Heart.

On stage, there is little doubt that Sowder is the leader. In addition to writing the group’s most requested song, “He is so Wonderful,” Sowder serves as the group’s master of ceremonies and is a popular figure around the group’s merchandise table.

Bass singer Bob Abbott answered Sowder’s call seven years ago. A retired Lexington firefighter, Abbott had been singing gospel for over 35 years. For seven years, he worked with The Messengers, a popular regional group that for a time featured pianist J.D. Miller, who had worked with the Gaithers. Abbott also served with His Witnesses, singing with a teenaged Randy Crawford, now with The Kingsmen. 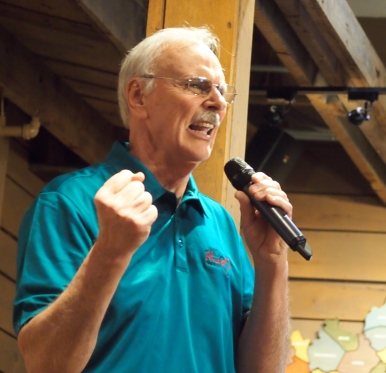 Bass singer Bob Abbott delivers a soulful verse of “I’d Rather Have Jesus” during a concert at the Kentucky Music Hall of Fame in March.

Abbott smoothly meshes the low harmony and delivers a touching solo of “I’d Rather Have Jesus” that leaves no doubt of the sincerity of his words.

Sowder remembers when his previous bass singer left. “We were without a bass singer one day,” he says. “I called Bob and he joined our group. God honored our request with Bob. He is a man of honor and integrity.”

Abbott adds, “I can just see God’s hand on the quartet, the way He has put us together and I am just grateful to be a part of it.”

On the other end of the stage, tenor Kyle Harris is the relative newcomer to Southern Gospel. Originally hired to play piano five years ago, Harris filled in when the group needed a tenor. Now, he’s one of the most recognizable voices in Kentucky.

“He’d never sung with a group,” Sowder marvels. “God changed his voice from a lead to tenor and God opened our eyes. He was right there.”

Harris, who works as a pharmacist in his hometown of London, Ky., says that while it is true he’d never sung in a traveling group, he was not exactly a gospel novice when he started tickling the ivories for His Heart.

It started for Harris in Bald Rock Baptist Church in rural Laurel County. “I had sung in my own church for years,” he says. “I had been playing piano in my home church since I was about 13 years old and had been taking piano lessons since I was in elementary school.”

Tenor Kyle Harris joined His Heart as pianist, but started singing three years ago. It was his first time singing with a group.

About three years ago, Harris moved from the piano bench to the tenor slot. “There was a lot of prayer and a lot of practice,” he smiles. “I had sung different parts at church so singing the part was not all that hard. The difficult part was stretching my voice to hit those high notes.”

And His Heart has never hired another pianist, relying on accompaniment tracks instead.

Jeremy Dickerson left a full-time career singing with the group Forgiven to sing lead for His Heart in 2015. “I was traveling around the country and that was kind of a dream of mine, but I was ready to come off the road for a while and come home to be with my wife. Bill likes to say as soon as I got off the (Forgiven) bus, I walked down to the other bus,” Dickerson laughs. “But, it was really about a week that went by. Then I walked over to the other bus….I didn’t want to get out of singing, so it didn’t take long.”

Dickerson, who lives in Lawrenceburg,works in the screen printing and promotions business full-time but his passion is singing. It undoubtedly comes from having gospel music veterans on both sides of his family. “It kind of comes natural, I guess,” Dickerson says with his country boy smile.

Sowder had heard Dickerson sing with Southern Harmony, another Kentucky quartet. “I said, ‘If I ever need a singer, that’s who I want.’”

It was the final piece of a musical puzzle that has made His Heart one of Kentucky’s most popular groups. They travel across the state and have been as far south as Alabama and as far north as Canada. They are regular performers at the Kentucky Music Hall of Fame, where their sound engineer, Avery Bradshaw, is manager.

The group has had three songs climb into the Top 80 on the Southern Gospel charts and is wowing audience with current songs such as “If You Knew Him,” “Calvary Answers for Me,” “I Stand Redeemed,” and “I Feel Like Running.”

Opening for Triumphant on June 21, His Heart received several standing ovations from a packed house at Sand Spring Baptist Church in Lawrenceburg.

But the focus is on having His heart more than singing as His Heart. The group has fun while bringing the message. Sowder will crack jokes, but then he and Abbott, both in their mid-60s, can be the targets of barbs from Dickerson and Harris, both 30 years younger. “We all get along well,” Dickerson says. “Bob is like a dad and Kyle is like a brother.”

He breaks into a big grin.

It part of the genuine love and camaraderie that gives His Heart a robust ministry.

“If we go up on stage and didn’t like each other, how could we be effective ministers?” Harris asks. “We have a fellowship and camaraderie that amazes me.”

Abbott adds, “A lot of times, when I am singing, I say, ‘Thank you, Lord. Thank you for Jeremy and Kyle and Bill. It’s such a privilege to be with them. I love them.”

Dickerson understands. “I want us to sound good, but if we can’t be friends and can’t get along, it doesn’t matter what you sound like. If you don’t have the heart, it won’t matter.”

It might have been what Bill Sowder was dreaming in 2010.

His Heart members, from left, Jeremy Dickerson, Bill Sowder and Bob Abbott share a laugh during a concert at the Kentucky Music Hall of Fame in March. 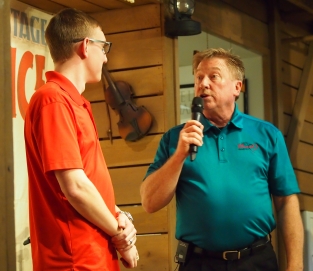 Bill Sowder, right, jokes with sound man Avery Bradshaw during a concert at the Kentucky Music Hall of Fame.

His Heart performs at the Kentucky Music Hall of Fame. From left are Kyle Harris, Jeremy Dickerson, Bill Sowder and Bob Abbott. (All photos by John Herndon)