Jim and Melissa Brady and Steve Ladd sing “Through It All” near the end of the annual New Year’s Eve concert at Sand Spring Baptist Church.

I so needed Monday night.

Let’s make that soooooooooooooo neeeeeeeeeded what I experienced Monday night.

It was Dec. 31, 2018. When I left my office at The Anderson News in Lawrenceburg, it marked the end of a run that lasted almost 34 years. I’d started writing as a freelancer and worked my way up to to sports editor.

When the last day is a holiday deadline, meaning an earlier deadline, it was easy to get worn down. It was a great run but you just know when it’s time to step away.

And, I will admit that announcing a retirement can be scary. Friends tell me retirement is great, but it’s uncharted territory. For years, I knew exactly what to expect nearly every morning when I woke up, where I would be and what I would be doing that day. There was a lot of craziness in the job but there was security too.

Monday ended that chapter in my life.

Steve Ladd in concert at Sand Spring Baptist Church Monday night. It was his final solo concert before going on the road full-time with Old Paths Quartett.

I was tired physically and mentally exhausted. But I was determined to make it to Sand Spring Baptist Church for the annual New Year’s Eve gospel concert.

For a variety of reasons, I’d never been able to ring in the new year with gospel music. Monday, I could have spent the evening at home watching football, or more accurately, going to bed early, but had promised my good friend, Larry Briscoe that my wife and I would be there.

It was the best decision I could have made.

During Steve Ladd’s portion of the show, he noted that Monday night would be his final solo performance as he would be touring with Old Paths Quartet full time starting in January. He’d been singing with Old Paths for about 18 months, but the dates were limited and he’d been busy with his solo career.

“We had put a press release out that starting Jan. 1, Old Paths would be back on the road full time,” he said after the concert. “I hadn’t talked much about it because you never know. I had six months of solo stuff to do and I didn’t want people to see it on my fan page or on Twitter and think, ‘Oh, he’s not singing.’”

But 2019 is bringing change to his life.

The other half of the concert featured the Jim Brady Trio, but when the Trio took the stage, it was just Jim and Melissa Brady. Jim explained that the other member of the group, Layke Jones, had decided to come off the road. 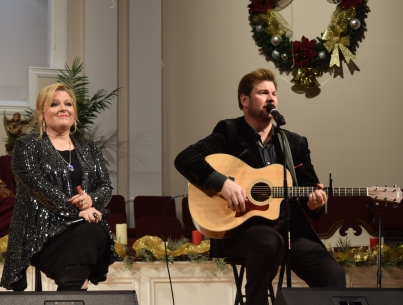 “It was Dec. 13, right before our Christmas vacation,” Jim Brady told me later. “He told us he was going to come off the road. It was unexpected but that’s OK. I realize God has the details.”

It’s part of the the professional music business, but it’s still a time of change for The Jim Brady Trio as well.

The timing is different. The circumstances are different. But I could somehow identify with Jim Brady and Steve Ladd.

And somehow, I felt they identified with me.

The concert did not have Sand Spring’s usual packed house. A day of heavy rain undoubtedly kept the numbers well down, but Brady could only smile about Monday’s gathering. “Tonight was a wonderful night,You saw it. It was our first night doing the duo thing together,” he said of doing a full gospel performance with just his wife, Melissa. “Ever since we got married, we have always sung together. When I was with the Booth Brothers, we did some Valentine banquets here and there. But like we did tonight, you got to see it for the first time and God showed up. Where we are weak, He is strong.”

Jim was on target.

God was clearly at work at Sand Spring Monday night. At least he was in my life, since I came expecting to just enjoy a concert but came away renewed in my faith after hearing Steve Ladd and Jim and Melissa Brady share about theirs in song and conversationally.

Ladd had been singing solo gigs for over nine years before going back on the road with Old Paths. He says God took care of him. “He kept me busy,” Ladd said. “I only had one Sunday off this year. I was off on the Christmas weekend, but I was singing every other Sunday. I have had six Top 40 songs. He has provided for my family. God has blessed me and kept me busy.”

As for the Jim Brady Trio, there was some concern when Jones parted ways. “Your first thought is ‘Oh, my goodness. This was unexpected. What are we going to do,’” Jim said.

“But you know what? God has reminded me, ‘I have taken care of you before. I brought you through difficult times before. I am not going to leave you now.’ There was uncertainty and apprehension at first, but as I started to think about the blessings of God in my life, I was reminded that He has never failed. He will show up again. He showed up tonight, very much so.”

The end of the concert featured the two acts performing impromptu together. Fittingly, they sang Andrae Crouch’s classic, “Through it All.”

Brady noted the key line in the song is “I’ve learned to depend upon God’s Word.”

Ladd is obviously excited about 2019 with Old Paths and the year will end again at Sand Spring, which has booked Old Paths and The Coffmans for Dec. 31, 2019. “I have been coming here nine years,” Ladd said. “They were the first promoters to book me when I left Gold City. That is special. My family comes along. My son is with me tonight. It’s a tradition and next year, I will be back with Old Paths.”

Brady says he’s letting God work things out in regard to a new member. He went on to say that he’s excited about recording a Christmas project in 2019. It will be a first for JBT.

Most of all, it’s about touching lives. I know first hand.

Sometime in the final 30 minutes of Monday’s concert I texted my wife, “I needed this tonight.” We showed the text to Brady.

“That is why we are here,” he said. “The time it takes to set up and the work it takes to put on a program is a lot of effort. It gets harder but the moments we love are when we see God at work in people’s lives. That’s what makes it worth it to us. When we know that while you were here, that God had a song or something we said just for you, it helps you smile. It gives you hope for tomorrow.”

While much of the world was revelling, the Sand Spring show closed with one of the greatest songs ever written, “Because He Lives.”

Brady says it was no accident. “What a great way to welcome in the new year because I know He holds my future.Life is worth the living just Because He Lives.”

I needed that musical reminder.

In times of change, it is the hope to which we hold.

Jim and Melissa Brady. (All photos by John Herndon, KentuckySings.com)