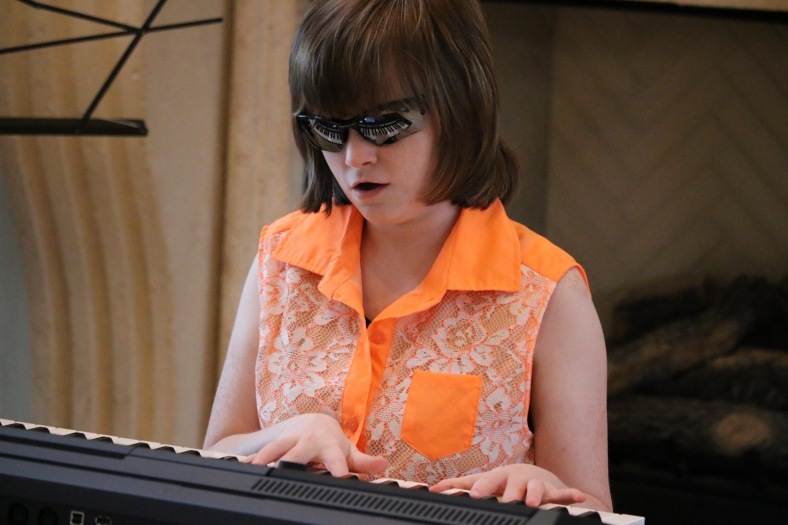 Marlana VanHoose plays the keyboard during a gospel concert. She says she is “God-taught.” (Photo furnished)

Blind since birth and small in stature, Marlana VanHoose’s powerful voice blesses many

It was more than fitting when Marlana VanHoose told me the first concert she ever attended was one by The Oak Ridge Boys.

“I was three years old,” she says before breaking into “Elvira, Elvira!” as we sat in a Lexington restaurant. I didn’t know she sang the legendary group’s most famous hit but I knew the 23-year-old singer could deliver a rousing version of a song the Oaks are also known for today.

Marlana, who was born with a condition known as cytomegalovirus (CMV) and has been blind from birth, burst on the scene after singing The National Anthem at a University of Kentucky women’s basketball game in 2012. The performance was posted on YouTube and since that time, Marlana has been in demand to perform “The Star-Spangled Banner” at various events across the country. She’s sung at Kentucky Wildcat basketball games and at various Major League Baseball and NFL games. She was also asked to sing in Cleveland during the NBA Finals between the Cavaliers and the Golden State Warriors.

She’s even sung with President Donald Trump in attendance and has given the President some sound advice.

More on that later.

(According to the Center for Disease Control website, www.cdc.gov, CMV is a common virus that affects people of all ages. The website says, “Over half of adults by age 40 have been infected with CMV. Most people infected with CMV show no signs or symptoms. When a baby is born with cytomegalovirus (CMV) infection, it is called congenital CMV. About one out of every 200 babies is born with congenital CMV infection.  About one in five babies with congenital CMV infection will have long-term health problems.”)

It became apparent soon after she was born that Marlana would be one of those “one in five.” When she was just a few weeks old, it was determined that she was blind as her optic nerve had not formed. The prognosis for living past one year old was not good, but she made it only to be diagnosed with mild cerebral palsy at age two.

Marlana is also very small in stature, causing many to think she is a pre-teen or in her early teens rather than a young woman in her 20s. But her ministry of one of a powerful voice, a powerful testimony and a mature knowledge of God’s word that overcomes any disability.

The blindness was a shock to Marlana’s parents, David and Teresa VanHoose, who live near Paintsville, Ky. “It was terrifying,” David says of the diagnosis of blindness. “It was scary. I had never been around anyone who was blind.”

But it wasn’t long before Marlana’s family knew she was going to be a blessing.

“She was rolling on the floor and humming ‘Jesus Loves Me,’” Teresa says. At age two, she was putting notes together to play melodies on a piano.

Marlana was living the words engraved on her necklace the day we met: “Never, never, never give up.”

Even if she only sang The National Anthem, Marlana would be an incredible inspiration. But her burning desire is to use her voice — and her life story — to lead people to Jesus Christ.

“God gave me this gift,” Marlana says, “and music is my passion. God called me to sing and he made me special for a reason. He made me little with a big voice.”

The seeds of Marlana’s ministry were sewn when her great aunt started taking her to church when she was three. She also spent much time with her great-grandparents, with whom she sang many of the old gospel hymns. David, who worked for the federal prison system, and Teresa, a special education teacher, were not attending church at the time, but that soon changed.

“She reinforced my faith,” David says with tears welling in his eyes.

“I was saved because of her,” Teresa adds, but Marlana quickly clarifies what her mother said.

“I didn’t save her. Jesus did,” Marlana says. 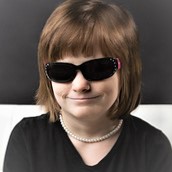 Marlana VanHoose will be in concert at Graefenburg Christian Church, June 30.

As we talked for the better part of an hour, it became obvious that Marlana believes God continues to direct her ministry. She says she loves being blind because God made her that way and she wants to stay that way. Remember that she learned to put melodies together on a piano at age two? She eventually learned to form chords and now plays the piano or a keyboard to accompany herself in concerts. It prompted nationally-known journalist Maria Shriver to ask Marlana if she was self-taught. Marlana answered, “No, I’m God-taught.”

It’s a ready answer from a young lady who is blessed by God and blesses people. And make no mistake, she’s a huge fan of gospel music, citing singer Shirley Caesar as a favorite. Marlana has sung with The Crabb Family and met Bill Gaither.

She says she loves being blind because God made her that way and she wants to stay that way until she gets to Heaven. “The first face I will see will be Jesus,” she says.

And as we talked about her upcoming concert at Graefenburg Christian Church, Marlana said, “I am excited to be able to sing at your church.”

But that brings us full circle to Marlana’s rendition of The National Anthem. She loves her country and has been featured at many military events. She says she would eventually like to schedule an event to be held near the Pentagon on the Fourth of July. “I would like to involve all kinds of churches as one nation,” she says.

It comes back to the advice she gave President Trump when she met him in 2017.

Marlana remembers the moment, “I told him Jesus Christ and God’s Word are what will make America great again.”

Marlana VanHoose to be in concert

Marlana VanHoose will be in concert at Graefenburg Christian Church, 5900 Louisville Road, Frankfort, Ky. on Sunday night, June 30 at 6:30 p.m. She plans to sing many of her favorite hymns and gospel songs along with The National Anthem that night.

You WILL be blessed.

A love offering will be received for Marlana’s ministry that night.

For other appearances by Marlana VanHoose, see www.littlemarlana.com.  We will also post her appearances in Kentucky and surrounding states on the calendar at KentuckySings.com.