Ann Downing sings at Cornerstone Church of The Nazarene in Frankfort, Ky., on July 28

FRANKFORT, Ky. — Ann Downing took a microphone, looked over the small crowd of people who had come to hear one of gospel music’s true legends.

I stand amazed in the presence

Of Jesus the Nazarene

And wonder how he could love me

How marvelous, How wonderful

And my song shall ever be

How marvelous, how wonderful

Is my Savior’s love for me!

There might never have been a more fitting concert opening in the history of music. Ann Downing is amazed at the way God has used her and continues to use her more than 50 years after she burst onto the gospel music scene as an 18-year-old soprano with The Speer Family. She’s still going strong, sharing the amazement of God’s love through music and a powerful testimony. 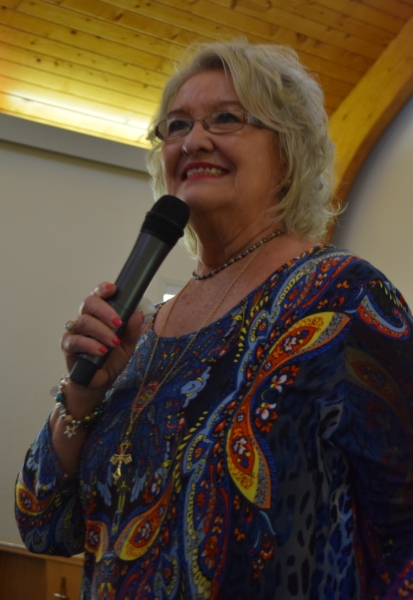 Ann Downing opens her concert with a stirring rendition of the hymn, ‘My Savior’s Love.’

Ann Downing took a few minutes to talk with me following her concert at Cornerstone Church of the Nazarene, a church she had visited 30 years earlier. She is the legend, the one who, with her husband, Paul, formed The Downings, a group that was at the top of the gospel music business more than 40 years ago.

Me? I am a retired sports writer trying to share stories of inspiration in the digital age.

And I can tell you that I needed the message Ann Downing delivered Sunday night.

How marvelous is my Savior’s love for me!

She invited those in attendance to join her in the great old hymn.

It was the first of many positive messages she would deliver over an hour-long concert. It wasn’t exactly what I had expected.

It was even better.

I had first seen The Downings in October of 1973. I was a huge fan of The Oak Ridge Boys, who were going to be at Louisville’s Memorial Auditorium. The other group on the marquee was The Downings. It was a pairing of two of the biggest names in gospel music at the time and might be compared to gospel’s version of a concert with Luke Bryan and Carrie Underwood today.

That Saturday night, I forgot about the Kentucky Wildcats’ football game and tagged along when my mom and her sister headed to Louisville. I don’t remember many details of that night other than The Oaks had a new tenor, Joe Bonsall, and that The Downings’ segment was filled with exciting hits like “Gettin’ Ready Today,” and “Greater is He that is in Me.”

I mentioned that night to Ann. “Louisville at Memorial Auditorium,” she smiled. “Someone told me this on Facebook, but I don’t remember this. They said we did 12 encores that night. The Oaks came out and joined us and then we joined them on ‘King Jesus.’”

Ann Downing listens as a fan shares with her following Sunday’s concert.

Like Ann, I don’t remember those details but do remember the place was packed and it still might be the most electric moment I have ever experienced at a gospel concert.

I’m not sure how many people filed into Cornerstone Church of the Nazarene Sunday night, but it’s probably fair to say it was less than 100. A Sunday morning concert in Louisville had been canceled at the last minute due to some significant vandalism on the church property.

As she took the microphone, Ann Downing stood alone, singing with recorded tracks. Well, she wasn’t really alone because there was no denying God’s presence was apparent.

Ann also called her assistant, Karissa Petty, to the front to deliver a jaw-dropping rendition of “The Lord That Healeth Thee.”

I stand amazed in the presence…

Ann Downing’s story is one of triumph, trial and victory. She’d been singing with a local group in Mississippi when Ron Page, then of the Oak Ridge Boys, heard her and introduced her to Brock Speer. She joined the Speers and while singing with the iconic group, she met Paul and they eventually formed their own gospel group. After winning numerous Dove Awards, the group left the road in 1978.

Paul and Ann started traveling again on a limited basis in 1984, but were fighting their own personal struggles too. “We had a family seminar in this very church,” she remembered. “That was the last time I was here. We found out that so many people were hurting.

“We didn’t realize so many people knew what we were going through. People would hear us talk about it and say, ‘We’re having the same problems.’”

Paul and Ann Downing grew in the Lord and headed to a women’s conference in California. “Paul and I were speakers at a women’s event in California two years in a row,” Ann remembered. “It was a huge event. They ended up having two different weekends. We spoke the keynote address. He said, ‘Ann, we need to do this back our way. There are women coming from all over the state of California.’”

The idea became the Middle Tennessee Women’s Retreat in Nashville. But a few months before the first retreat, Paul collapsed outside a motel in Winchester, Ky. and passed away at a Lexington hospital. Ann recalled that time during the concert, saying she’d lost her best friend while in the Bluegrass State.

She fulfilled the dates and became a regular on the Gaither Homecoming videos — the first was taped not long before Paul’s death. Today, she spreads positive encouragement with the same enthusiasm that endeared her to gospel fans nearly 50 years ago. The MTWR moved to Murfreesboro in 2017 and is still going strong. Ann and her staff are planning the 29th gathering next spring.

And she is active in promoting the history of gospel music.

“Absolutely!  First of all I am a history buff,” she says. “Gospel music has a great heritage. There are people who would ride in tiny little cars 15-16 hours in their suits just to sing, then turn around and go back home. There are people that have done that and paved the way.

“It’s not by accident that gospel music is what it is. There was a price to be paid.”

During her concert, she reminded the audience several times that Christ had paid the ultimate price and that is the basis for her joy. She referred to a clergyman who complained about the large number of songs about heaven as a “stupid pastor.”

She broke into a wry smile. “I thought, ‘Maybe you don’t want to go there.’ What you love, you are going to sing about!

“I refuse to be around people who will drag me down. I will not. I will say to them, I am sorry you are having a hard time. I will pray that you and God will find a way to work through this.”

How marvelous, how wonderful

Is my Savior’s love for me. 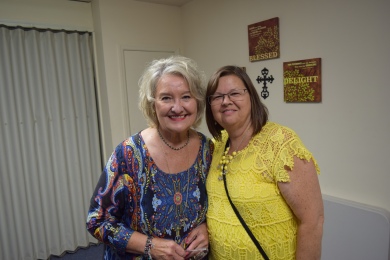 Ann Downing and me.