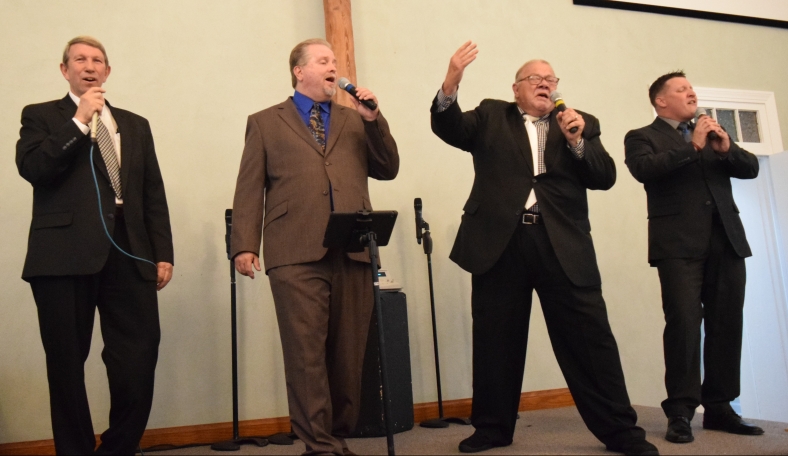 The popular Southern Gospel quartet, based in Shelbyville, Ky., has unveiled its latest CD project, “Going Strong,” but has had few opportunities to promote a work that took up about a year to put together.

“We had the CD around the first of June,” says Noblemen lead singer Garry Polston. “We just haven’t been able to sing since then.”

A group that is normally on the road nearly every weekend for 10 months a year, The Noblemen have been mostly quiet, at least when it comes to concerts, since March. The reason, of course, has been the nationwide shutdown prompted by the COVID-19 pandemic. Like almost every other musician of any  genre, The Noblemen calendar is filled with many more cancellations than appearances.

The Noblemen sing at Lawrenceburg Green on July 5, their only Kentucky performance since March. (Photos by John Herndon)

And, for now, The Noblemen are idle until Aug. 30, when they are to open for the Lefevre Quartet at Christiansburg Baptist Church, near Bagdad.

But that can’t dampen the enthusiasm for “Going Strong.”  The newest project, the group’s first in two years, features 11 songs, most of which had been released by other groups several years earlier. “We worked on this one for about a year,” Polston says. “Usually, it doesn’t take that long for us.”

Among the songs covered are Damascus Road, made popular by The Perrys in 2003, and Squire Parsons’ “The Lovely Name of Jesus,” recorded by The Kingsmen 43 years ago. Polston laughs as he says “The Lovely Name” is his favorite cut on the album because he takes the lead on that one.

There are songs written by Dianne Wilkerson, David Jenkins and Daryl Williams, and Timothy and Jerry Trammell. In addition, The Noblemen added a smooth version of a favorite old hymn, “Let the Lower Lights be Burning.”

Each of the other Noblemen, tenor Chris Daniel, baritone Tracy Bertram and bass David Martin, take their turns as lead on the new album. 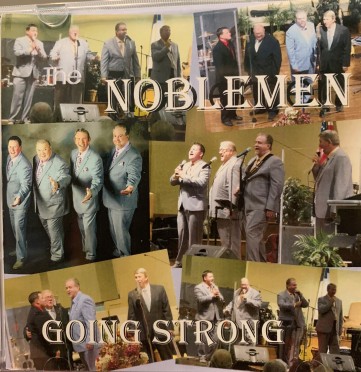 ‘Going Strong’ is available at Noblemen concerts or by contacting the group through its Facebook page.

Most of all, “Going Strong” is upbeat, which mirrors a concert experience with The Noblemen. “We have a lot of people who come to concerts with a heavy load,” says Polston, a retired Methodist minister. “That’s why I carry on a lot. We like to see people leave with a smile on their face and a spring in their step.”

And early feedback on the newest CD indicates that fans find the messages uplifting despite the chaos and gloom of the world today. “People tell us they like it because it’s upbeat,” Polston says.

“Going Strong” is available at any Noblemen concert for $10. Polston says the CD can also be ordered by contacting The Noblemen through the group’s Facebook page for $15.

The Noblemen perform at the 2019 Kentucky State Fair Gospel Music Showcase. They were named the best quartet on the program.