LEXINGTON, Ky. — After nearly 50 years, The Noblemen Quartet is back where it started.

And the group, or its fans, could not be happier.

“We are having a lot of fun right now,” says bass singer Dan Clark, one of the quartet’s founding members. “These guys love to sing. They are all great Christian men and we really try to uplift Jesus Christ. We are not entertainers. We are just singers and try to sing for God.”

A concert at David’s Fork Baptist Church underscored Clark’s assessment. While the accompaniment consists of strong modern tracks arranged by Clark, the presentation was typically old-fashioned gospel quartet featuring standards such as “Jesus is Coming Soon” and more recent Southern Gospel hits like “I Rest My Case at the Cross.”

But The Noblemen Quartet is much more than a group just performing covers. “I can’t think of any group we are particularly like,” baritone Joe Hampton says. “We do have a unique style going back to some of the old songs and we try to sing the old type quartet stuff.”

Tenor Rob Wagoner adds, “We are unique in that we do our own arranging. Dan does that for us. We take an old song and try to put a sound to it that is special to The Noblemen.”

If the packed house at David’s Fork was any indication, the group has succeeded. In a 35-minute opening for The Nelons, The Noblemen received numerous standing ovations. A quick glance at the audience revealed many joining the gospel veterans in their favorite songs.

It all went back to the tip several prominent groups gave the small-town Kentuckians as they embarked on their gospel music road. “The best advice we were given was to be yourself. Don’t try to copy what other groups are doing,” remembers lead singer Charles Hampton, who founded the group with Clark, his life-long friend.

Charles and Joe Hampton had been singing in a family group, The Hampton Brothers, until Joe enrolled at Kentucky Christian College (now University). Soon after, Charles and Clark formed the nucleus of The Noblemen Quartet. “We sang until 1976, when Dan got offered a job and moved away,” Charles Hampton recalls. “Then he came back to Kentucky and we reorganized in 1978. Rob came in at that time. We stayed that way until 1986 when Dan’s job took him to Florida.” 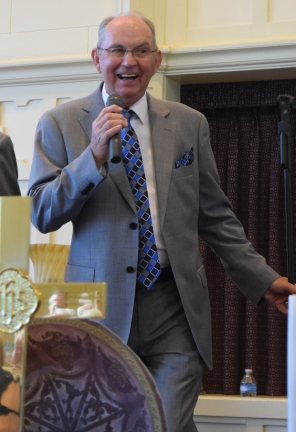 Meanwhile, Joe Hampton had graduated college and was pastoring a church in Missouri. While there, he was part of a trio called “Son Light.”

Over time, life called and The Noblemen went their separate ways. Charles Hampton stayed close to Tollesboro, Ky., his childhood home. Joe Hampton left the located ministry and relocated to Lexington while Wagoner continued to play piano around central Kentucky and eventually entered politics. Wagoner is now serving his third term as mayor of Sadieville, Ky., a small town just off Interstate 75, north of Georgetown.

Meanwhile Clark became a well-known name in Southern Gospel, singing  for The Nelons after Rex Nelon retired from touring in 1998. Dan held that spot four years before stepping away.

“Jason (Clark, Dan’s son) was playing bass and singing with The Nelons,” Dan recalls. “Every time I would go see them, Rex would get me up in front to sing a song. When I was a kid, I would listen to Rex. I would listen to the great bass singers: Rex, J.D. Sumner, George Younce, Big Chief (Wetherington), all of them. I would sit in a little rocking chair and listen for hours and I would try to mimic them.

“Rex always said that he liked my voice because I sounded a lot like him. I count that a great compliment.”

Despite a health scare earlier this year, Dan Clark is sounding as good as ever, just like the entire group. They are having fun while sharing the name of Jesus.

“I don’t think I have ever heard them sound better,” Jason Clark said while serving as master of ceremonies during The Nelons’ portion of the concert at David’s Fork on July 11.

Jason, who now sings lead and plays guitar for The Nelons, might be responsible for The Noblemen’s resurgence in popularity. The group had been apart for over 20 years but the bond was still close. “These guys have been lifelong friends,” Dan Clark says. “Even though we weren’t singing together, we kept in touch, especially Charlie and me. We are like brothers.”

Several years ago, Jason, who was 13 when his family moved to Florida, approached his father. “He said, ‘I would like to get you guys back for a reunion concert,’” Dan Clark remembers. 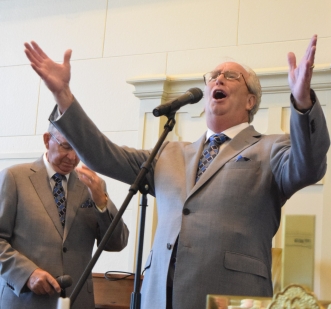 Tenor Rob Wagoner pours his heart into a song at David’s Fork.

Believing there was a market for old style gospel quartet music, the group reunited even though they lived miles apart. Eventually they hosted a Good Friday concert in Maysville with The Nelons. It has become an annual sold-out event.

But The Noblemen want to be known for simply telling the simple truth of salvation found in the Bible. “If I wasn’t singing, I would be playing in a church,” Wagoner says. “When we are not singing, I play for my home church, Corinth Christian in Corinth, Ky.”

The Sundays at home are limited. The Noblemen routinely play over 50 dates a year, taking the group throughout the Kentucky, Indiana and Ohio. But while the venues change, the message never does.

“We are all about ministry,” Joe Hampton says. “It’s our desire that in our concerts, the audience sees Christ in our songs and in us. We don’t want people wondering about our group, ‘Do they know Jesus?’”

The Noblemen do and continue to sing His good news.

Jason Clark knew something was seriously wrong with his father’s health when Dan Clark attended a Nelons concert in Bedford, Ind., on April 6. “We begged him to see the doctor and go in,” Jason remembers. “He went to the ER and the doctor put him in the hospital. They started him on immediate dialysis.” 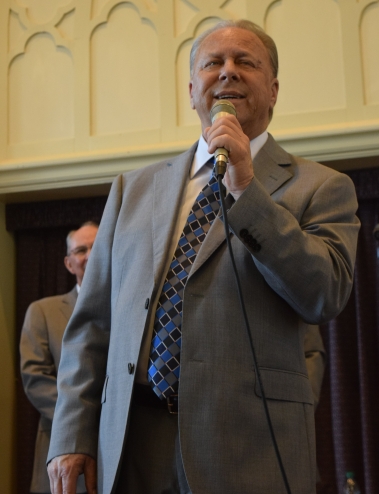 Dan Clark sings at David’s Fork Baptist Church. His son, Jason, says he is a new man after a serious health scare.

Both of Dan’s kidneys had stopped working, putting him in a New Albany, Ind., hospital for nine days. “My kidneys just quit functioning. There wasn’t any filtration at all,” Dan says.

Jason stayed with his father while The Nelons continued singing on the road.

While Dan’s health was the most important issue, The Noblemen Quartet was scheduled to host its signature event, a Good Friday concert with The Nelons and The Old Time Preachers’ Quartet on April 19.

The concert went on as planned with Jason Clark stepping into his father’s role with The Noblemen.

“I’m not a bass singer, but I sang with them,” Jason says. “I didn’t need to rehearse with them because I know all their music. I am too young to know all of their older music but I produced their new CD. It was fun. They needed me to step in for dad.”

Charles Hampton, the group’s lead singer, notes, “He knows every song we sing but he had never sung those songs with us.”

Jason laughed when asked if he got some pointers from the OTPQ’s legendary bass, Mike Holcomb. “I kind of gave him a microphone and said, ‘Here, give us your low notes.”

Dan Clark soon returned to The Noblemen Quartet and looks and sounds great. He undergoes nightly dialysis at home and goes in for bloodwork to put him on a list for a donor kidney on July 22.

“Where I saw him three months ago when he was in renal failure to where God has brought him today is a miracle,” Jason Clark says. “It is a miracle he is even alive!

“By science and doctors and the gifts that God has given them, he is a new man right now. We are going to wait for a transplant but in the meantime, he’s doing nightly dialysis. It’s really made him a new man. Even in unforeseen circumstances, none of this catches God off guard. We have to learn to put our trust in the Almighty.”