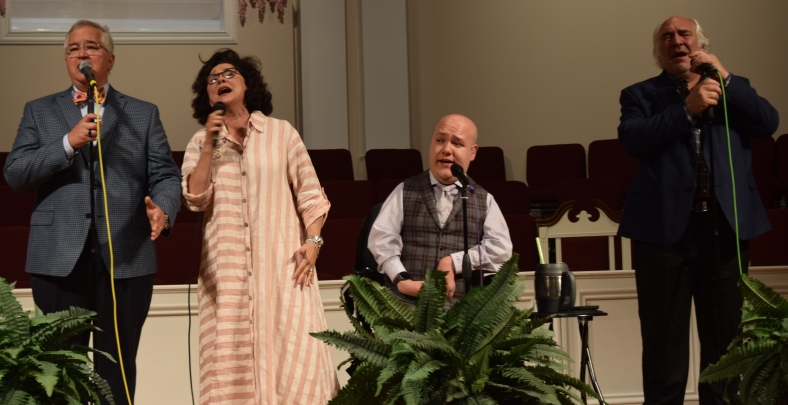 The New Speer Family performed at Sand Spring Baptist Church in May. The group got together in 2018 as Brian Speer wanted to keep the songs of his legendary family going. From left are Brian Speer, Allison Speer, Ben Waites and Mike Allen.

(NOTE: This article, by John Herndon, originally appeared in the June edition of SGN Scoops magazine.)

Brian Speer just knew he needed to get back on stage.

“After all of Brian’s people were gone, he woke up one day and said, ‘I think we need to do a quartet,’” Brian’s wife, Allison Speer, says. “It shocked me! We had never talked about it and had never discussed it.”

But something had been burning in Brian’s heart ever since his uncle, Ben Speer, and his aunt, Rosa Nell Speer-Powell, the last surviving members of The Speer Family, died in 2017. He knew someone should carry on the legacy of the Southern Gospel pioneers who were active from 1921-1998.

With Allison, who has had a successful solo ministry for 35 years, fully on board with the idea, the New Speer Family was born, first performing last summer in Lawrenceburg, Tenn.

We caught up with The New Speer Family before their concert at Sand Spring Baptist Church in central Kentucky, less than an hour’s drive from Allison’s childhood home of Parksville.

“I had been traveling with Allison and running the sound. I manage the ministry,” says Brian, who traveled with the original Speer Family from 1977-1982 before enrolling at Trevecca Nazarene University in Nashville. “I really never had any desire to go back on stage. I think the Lord just moved in me and used the risk of losing this heritage in music to prompt me to try to bring it back.” 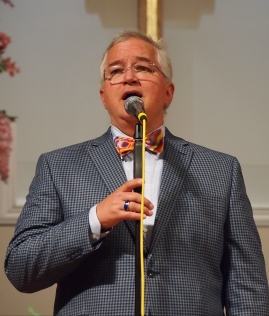 Brian Speer had been off the road 36 years when he decided to revive the Speer Family music with The New Speer Family.

It was a dream to revive the legacy of gospel classics such as “Heaven’s Jubilee,” “Sweeter Each Day,” and “I Never Shall Forget The Day.” All are included on The New Speer Family’s inaugural album, appropriately named “A Singing Heritage.”

He was content until he came to grips with the realization that The Speer Family influence on gospel music could be lost.

From their farm in Gravel Switch, Ky. — “We don’t want to sound too high-falutin,’ so we say we are in the suburbs,” Brian quips. — Brian and Allison Speer went to work.

“I had asked every group in Southern Gospel music to let me join somehow,” Allison smiles. “I asked every quartet, every gospel group because I wanted to sing with somebody else. It just never did work out. 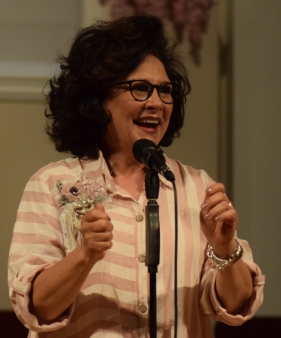 Allison Speer shares some fun stories during a concert at Sand Spring Baptist.

“The first thing we said was ‘Who are we going to get to sing with us?’ The Speers always had at least four and most of the time five or six singers. So how are we going to accomplish anything musically with just the two of us?”

They called Ben Waites, a Louisiana native who had never traveled with a group before but had been singing solo for nearly 18 years despite just turning 30 in late May.

Waites credits his grandfather, who sang gospel regionally, with turning him toward the music he loves. “We were watching The Cathedrals’ farewell celebration at the Ryman (Auditorium),” Waites says. “The camera panned the audience and my grandfather saw Ben Speer. He said Ben Speer has (the Stamps-Baxter) School of Music in Nashville and you ought to go. Two years later, I was 13 and went to my first one.”

Allison and Brian Speer noticed. “He came every year,” she says. “He was very determined to learn this thing called music. We loved him inside and out. We loved his heart, his voice and his determination.”

The Speers also reached out to gospel music veteran Mike Allen, a bass who had traveled with Allison on the Gaither Homecoming Series. He jumped at the chance. 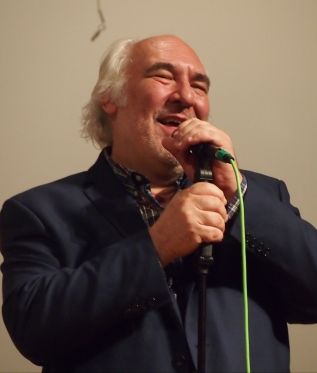 Each of the singers continued their solo ministries. “We thought it would be something we would do a few times a year and have a little fun with, but it has turned out to be much more than that,” Brian Speer says.

The journey began in the summer of 2018 in Lawrenceburg, Tenn., where G.T. “Dad” Speer moved his family after taking a job with the James D. Vaughn Music Company in 1934.

The New Speers have been busy ever since, despite an unusual travel arrangement. Brian and Allison Speer live in central Kentucky while Allen and Waites live in Nashville, three hours away. Waites was also born with arthrogryposis multiplex congenita, commonly called “AMC,” a condition that decreases flexibility in the joints. Waites is confined to a wheelchair and his wife, Natalie usually drives him to shows. 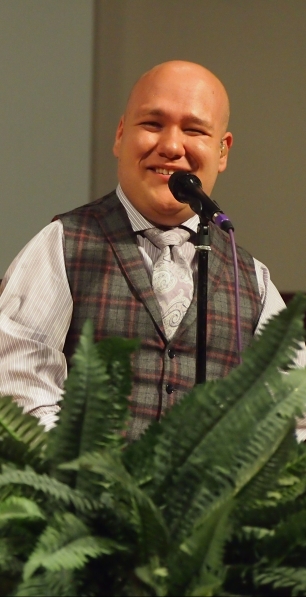 Ben Waites impressed Brian and Allison Speer with his desire to become a gospel singer. He is the lead in The News Speer Family.

Working it out is a good way to describe The New Speer Family’s approach to the classics. The concert at Sand Spring was strongly influenced by the Speer legacy and moved what Brian called a “receptive and open” crowd with a rousing version of the Gaither classic, “The King is Coming.”

“The Speer Family was the first to record that song,” Brian says. “Every song we did tonight, except ‘It is Well With My Soul’ was recorded by The Speer Family.” With Waites soloing, “It is Well”  brought the Thursday night crowd to its feet for an extended round of applause and appreciation.

“A Singing Heritage” is filled with Speer standards. The liner also contains a photo of the Speer Family that looks to be from the 1930s and includes a photo of The Speer Family’s 1965 album of the same name, released on the Heart Warming label.

The irony in resurrecting the Speer heritage is that Brian Speer’s five-year journey with his family is the only direct connection to the past. His wife’s introduction to gospel did not include the Speers or most of the other Southern Gospel greats.

“I was raised here in central Kentucky,” Allison remembers. “We got our music from WJMM radio in Lexington and it was not a Southern Gospel station. It was contemporary. I am a child of the contemporary music of the 70s and 80s. Reba Rambo was a soloist then. Sandi Patty came along. Steve Green. Larnelle (Harris, like Allison, a native of Boyle County, Ky.), Amy Grant, Twila Paris.

“I was not familiar with The Speer Family until I started going to Nashville to do music there.” 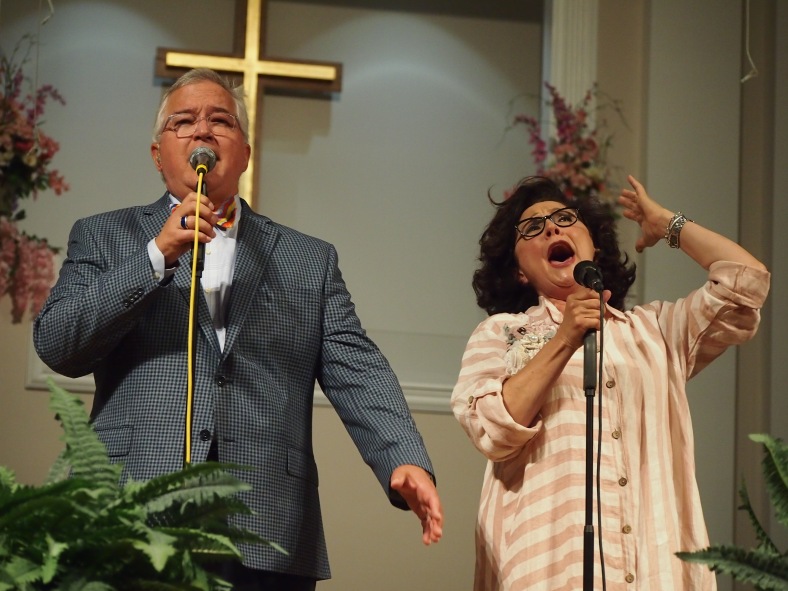 Allison began recording for Impact, a sister label to Homeland Records, which was producing The Speers’  albums. And in the studios, she met Brian Speer, a Homeland accountant.

“We began to date,” Allison says, “and then my life went completely downhill after that.”

Brian, sitting next to his wife, erupts with laughter. Allen and Waites join in and share some of their own barbs.

The laughter is fitting as The New Speers would incorporate some of Allison’s famed comedy into a night of heartfelt worship. She tells stories of growing up in rural Parksville. With numerous family members and lifelong friends in the audience, she transforms her powerful voice to one sharing about her grandmother’s lessons about baking pies.

But she also takes time to offer some commentary on current events and challenges the audience to bolster its faith in Christ, then live accordingly in a world she believes to be growing more hostile to those who live the Christian faith. She reminds the audience of the powerful messages in the traditional hymns and gospel classics.

That passion prompted Allen to accept Brian and Allison Speer’s invitation to join their new venture. The former Marine had been a Speer Family fan since meeting Ben Speer more than 35 years ago. “Ben and the whole family, Faye, everybody, just welcomed me into the family like I was one of their own. I have been a Speer ever since, in my mind.”

Through the Gaither Homecoming series, where Ben Speer served as musical director, Allen became even closer to The Speer legacy. He relishes the idea of presenting Southern Gospel history to a modern audience.

“There are so many songs,” Allen smiles. “So many songs I would love to hear Brian say ‘We are going to do this song and that song.’”

For now, The New Speer family is juggling several different roles. Brian and Allison realized they had few reasons to stay in Nashville after Ben Speer’s death, so to be near her mother, they bought a farm near her childhood home. They plan on a summer move into a new home on the property. 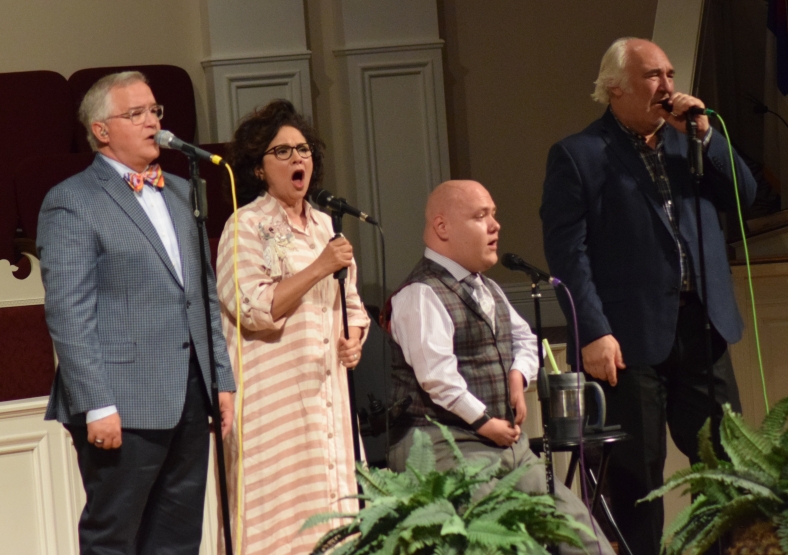 The New Speer Family during the concert at Sand Spring Baptist.

Allison and Brian plan to continue her solo ministry while Waites, who serves as a vocal coach in Nashville, and Allen also have solo ministries.

However, a venture that figured to be a few dates a year has blossomed into much more. Brian says the group has done between 30 and 40 concerts in addition to recording its first CD. A glance at newspeerfamily.com shows calendar filling with dates ranging from Florida to New Jersey to Texas.

Those dates are opportunities but also challenges not lost on the singers.

“The basic thought for mie is that we can somehow, even remotely, can continue The Speer Family name and do it justice,” Allen says. “I mean, they were so amazing that to even try to copy what they have done would be impossible. But to just bring back or continue that name and do it justice and do what they originally tried to do in the beginning and that was to spread the gospel.”

Waites that legacy and purpose. “Through that vessel, I hope to accomplish what they accomplished in spreading the gospel and give people the opportunity to know Christ as their personal savior.”

During The Speer Family’s amazing run, G.T. Speer was known for stopping songs to share a testimony, then resume the music by saying, “Let the song go on.”

The New Speer Family is letting the songs go on again. 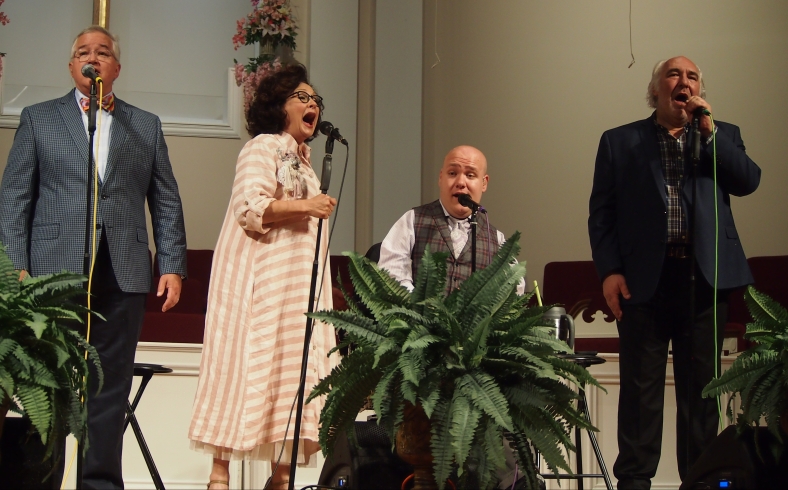