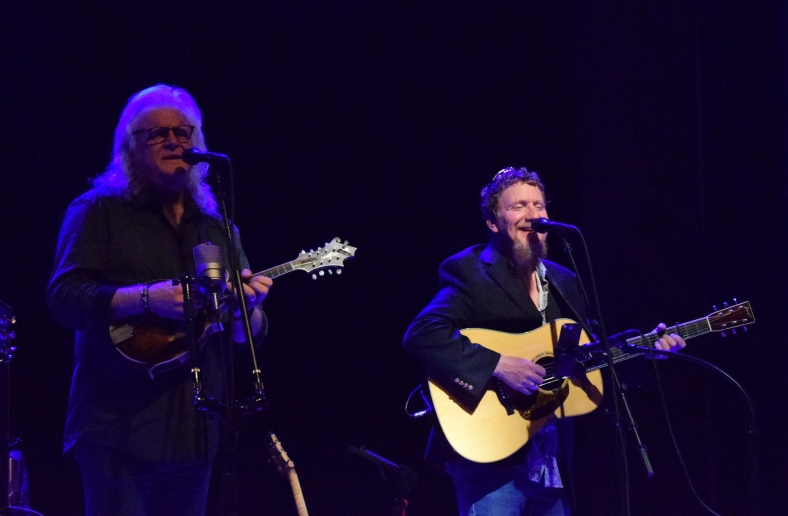 Dennis Parker, right, takes the lead on “Carolina in My Mind” as country and bluegrass legend Ricky Skaggs sings harmony at Renfro Valley on July 20.

Dennis Parker had big-name gigs and a Grammy to boot, but found real joy when he had nothing but God’s love

The group would accompany Country Music and Bluegrass Music Hall of Famer Ricky Skaggs and  bring the house down with standards like “Uncle Pen,” “Rawhide,” and “Pig in a Pen,” each of which could elevate the heartbeat enough to qualify as aerobic exercise.

But in a dressing room backstage, Parker reflected on a life that has taken him to the heights of country music with a Grammy Award and performing in sold out arenas across the nation. It’s a life that has also seen him homeless and struggling with alcoholism that eventually put him in jail on five different occasions.

He’s asked if he has a favorite song.

“Just give me Jesus,” Parker says.

For the better part of an hour, Dennis had been sharing the amazing story of how he had been in jail when the one friend he had in the world said, “God loves you.”

“I thought it was crazy,” he says. 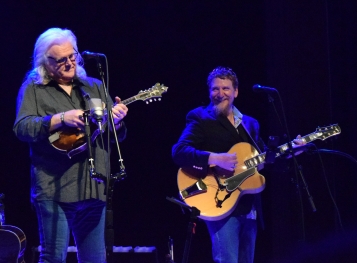 He had been recalling going to an Alcoholics Anonymous meeting when one of the support people happened to be a childhood friend. “The first time I went, there was a guy who was there who I hadn’t seen since I was a kid. He was part of the group that came. I really believe God had him come there to get me, the 99 sheep and the one missing. The shepherd would leave the 99 and go get the one.

You can have all this world.

Just give me Jesus.

That’s where Dennis Parker is today. Every time he takes the stage with Kentucky Thunder, he stands next to Ricky Skaggs, one of the biggest names in music.

But when Dennis Parker looks back four years at a life filled with despair to the joyful one he lives today, it goes beyond standing by an icon that he calls “a beautiful person.”

Its a transformation beyond what we can see.

“I really think this is the tapestry of God,” Parker says. “You can’t credit anybody but God.”

Let’s back up to the beginning when Dennis Parker showed some interest in playing banjo. “I was born in Fairbanks, Alaska. My dad was in the military so we lived in Miami, Boston and ended up in Huntsville, Alabama. My dad bought me a cheap banjo at a yard sale. It wasn’t very good and I didn’t like the sound of it.”

His father was learning to play as well, but that instrument was stolen. Dennis’ dad bought a new one but he eventually got the old banjo back and gave the new one to his son. “My dad set me down and taught me a song,” Dennis says. “By the time I was six, I was playing songs. By the time I was seven, I won a bluegrass contest.” 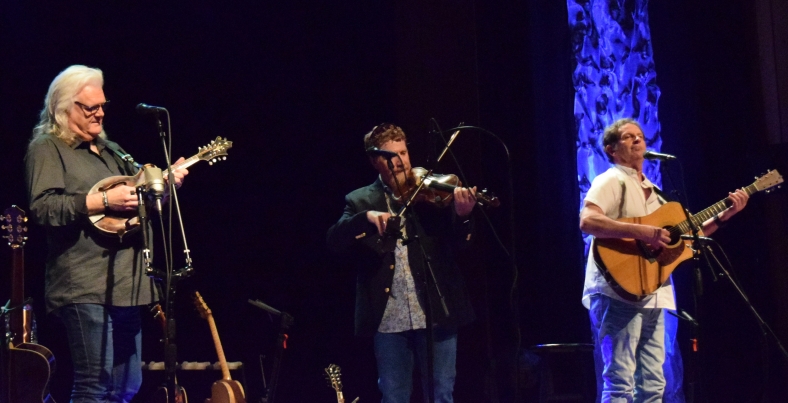 Today, Dennis can still pick the 5-string some but plays rhythm guitar, mandolin and fiddle and sings harmony vocals for Kentucky Thunder. At Renfro Valley, he stepped to the microphone to take the lead on a fine cover of James Taylor’s “Carolina In My Mind.”

Dennis’ career has taken him to gospel music where he traveled with Jeff and Sheri Easter before getting the first of two stints with Skaggs.

“When I left Ricky, I went to the country realm. It was a real pursuit of self,” Dennis says. “I wanted to get away from the bluegrass. I wanted to do my own thing and sow my oats and boy, I sowed them all right.”

There were gigs with Joe Diffie and Mark Chesnutt. He played for Tracy Lawrence and Lee Ann Womack.

“I wasn’t a good drunk,” Parker says. “I was like a blackout drunk. I never could drink a couple of beers and say ‘Let’s be done with it.’ I was a let’s go all night until I passed out kind of drunk.

It got to a point where people were already talking about Parker as one who had squandered a gift. “Looking at a span of maybe 10 years, it kept getting worse and worse. It was a bunch of habitual lying. I was trying to cover my steps. Everybody pretty much saw the truth but I as using a bunch of lies to cover it up.”

And Parker started going to jail for DUIs. 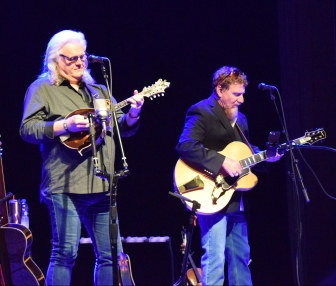 He bounced around Alabama and Georgia, finally returning to Huntsville but wound up on the streets. “I ended up homeless,” Dennis says. “I was living behind the Costco in Huntsville. I had a Takamine guitar bag and I had a couple of warrants for my arrest in a couple of places.”

The law caught up with Dennis and he spent six months in jail. He says only one person would befriend him.

“Cindy Musselwhite. We had played some music together. She was the only person who would have any friendship with me and when I went to jail, she was the only one who would really talk to me,” Dennis says.

And he believes the Holy Spirit led her during a conversation over the jail phone. Dennis remembers, “She said, ‘God loves you. You may not know it or you may not feel it now but you are right at the places you need to be, away from everybody, away from everything and away from all the responsibilities. Get in the Bible and let Him reveal himself to you.’”

It wasn’t what the talented picker wanted to hear.

“I thought that was the biggest nonsense I had ever heard in my life,” he says. “I wanted somebody to feel sorry for me, for somebody to empathize where I was because I was so used to manipulating people to get what I wanted out of them.

“FInally, I had someone tell me the truth.”

And while in jail, Parker began attending the AA meetings. He came to realize alcohol controlled him. “I got to the point where I couldn’t stop,” he says. “I wanted to. I would have given anything to stop drinking. I had no answer….I remember just not knowing how to not drink.”

And he realized that only God could do the healing. 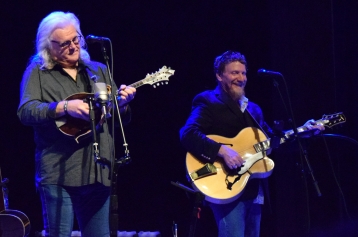 Dennis Parker, right, is happy today after he allowed God to work in his life. (All photos by John Herndon)

The excitement in his voice needs no exclamation points. They would not do his emotions justice.

While Dennis can’t tell you the exact date, he can point to the day he accepted that his sin was destroying him and cried to God for redemption as “the best day in my life.”

Today, Dennis is happy. Playing for Ricky Skaggs, he knows that every show is going to include multiple songs that tell the gospel message. At Renfro Valley, the scheduled songs included “Shepherd’s Voice” and “Can’t Shake Jesus,” both of which reflected his struggle.

During an encore, Skaggs sang the lead while Parker supplied harmony on “Work of Love,” from Skaggs’ “Mosaic” album. The last verse reads

What could make a man go out 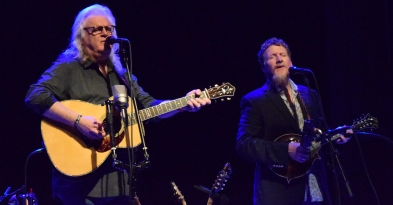 Change his life and turn about

From wrestling with to resting with a dove

With no thought of turning back

Giving everything he has

Hallelujah that’s a work of love

While it would make a great movie to say Skaggs rescued Parker, it was the Lord’s work. “The truth is, he had no idea about the mess I had gotten into,” Parker says. “I was coming out of an AA meeting and getting on a bicycle when I got a text from him in 2015. I hadn’t talked to him in about 20 years.  I had tried to get in touch with him a few months after I had gotten sober.”

And Parker says that text led to a gig that gives him the visibility to share his story and share the gospel.

“God is in control, man,” he says. “If we think we are the ones doing all this stuff we are giving ourselves way too much credit. I have been way more aware of that in the last three years. The things I have been able to do, the people that have been brought into my life. Good solid unbelievably beautiful people. I didn’t do any of that. I wish I could take credit for some of this. I wish I could take credit for my sobriety.

“I wish I could take credit for the fact that I am here. I can’t take any of it. God controls all of it. Every bit of it.”

Soon after leaving jail in 2015, Parker and a friend started recording a project, “Songs Under the Air Condition Ing Unit.”

Dennis explains, “In that project (available on CD and download), I tell my story and the good news of Jesus Christ. The download is available on iTunes and Amazon while the CD is available at banjobenclark.com.

Dennis has continued an offshoot of the project with Facebook posts of him delivering songs extolling the good news of Christ.  Among his recent entries are “Jesus Paid it All,” “There is a River,” and “I’d Rather Have Jesus.”

It’s real. It’s authentic. And it reflects who Dennis is today. “The same guy you see under the air conditioner is the same guy you are going to meet when you come out here,” he says. “I’m flawed there. I’m flawed here, but God is still working on me.”

He shares his story as often as he can and has been invited to several churches.

“It doesn’t matter about the numbers,” he says. “The message is the same if there’s 10 people there or 10,000. You tell the story and even as uneloquent as I can say it, God can use me. That is encouraging. That is exciting. I don’t have to be awe-inspiring. I just have to tell the truth. Tell the truth, man, and let God do it. If no one responds, wipe the dust off your feet and go someplace else.”

Parker has no fee for sharing his story, remembering his predicament four years ago when multiple DUI’s left him without a driver’s license. “When I got out of jail the last time and was just starting back with Ricky, I was riding a Greyhound (bus) from Huntsville to Nashville. If God can provide a Greyhound for a five-DUI alcoholic, I can drive to a church to tell them what Jesus has done. I don’t tell a story about someone quit drinking. I can’t tell the story without telling about Jesus because that is exactly what happened.

He begins to shed some tears.

Just give him Jesus.

NEXT: Dennis Parker talks about how playing bluegrass music has become a ministry with Ricky Skaggs. 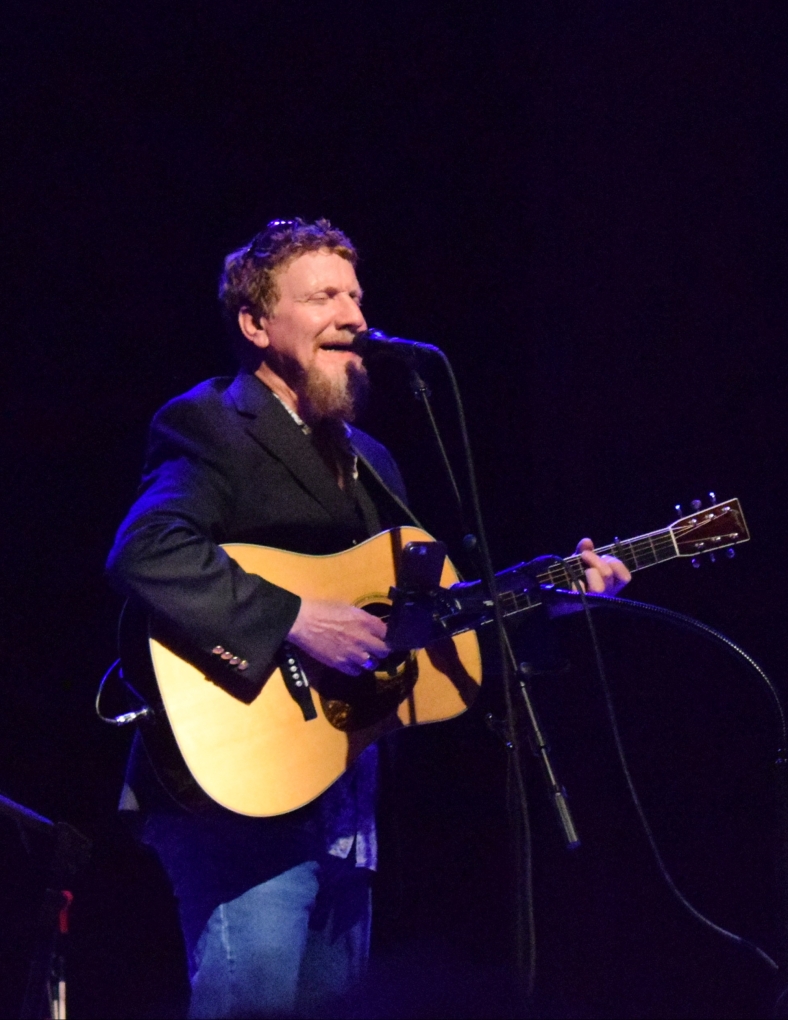