Brandon Porter performs at the Kentucky State Fair. It was his first public appearance as a soloist since suffering a stroke in 2015. (Photo by John Herndon)

Even without a ribbon, Brandon Porter a big winner at State Fair

SHELBYVILLE, Ky. — Brandon Porter doesn’t have a big trophy or large blue ribbon from his appearance in the Kentucky State Fair Gospel Music Showcase, but there’s little doubt that he is one of the biggest winners in this year’s competition.

He won as he strummed a few chords on his Yamaha guitar and his deep voice resonated, “Life is like a mountain railway…”

He’d lived the curves, the fills and tunnels, just as Eliza Snow penned in the 19th Century. And on Aug. 22, he was keeping his hand on the throttle and his eye on the rail.

As he drove in for the showcase, Porter’s thought process was simple: Just get on the stage and sing for the Lord.

He’d been a promising singer with dreams of making it big. Even though that didn’t work out, he’d remained musically active in several states before settling in southern Kentucky.

Porter made a trip to Nashville where his father had undergone a series of brain surgeries at Vanderbilt University Medical Center. While in town, he made his way to Opry Mills Mall where he says “the lights went out,” for about 40 minutes. 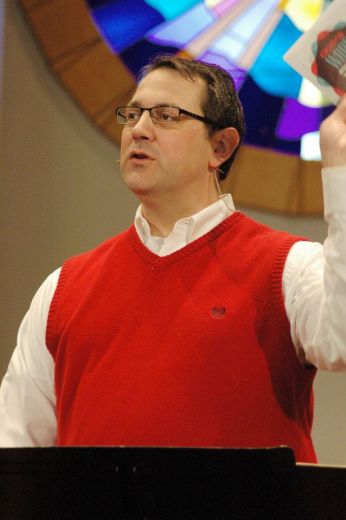 Not the mall lights. His lights.

“I was by myself at Opry Mills. I had been having some symptoms for about a month and had some tests, but nobody thought it would be a stroke at 41 years old,” Porter remembers.

But it was happening in the food court of one of Nashville’s most popular destinations.

“I couldn’t get anybody’s attention. I couldn’t speak louder than a whisper,” he remembers. “When I felt something happening, I tried to get to a place where there were people.

“I thought if I could just fall on the floor, someone would come over and check on me, but I couldn’t push myself to fall. My thought process was very slow. And I am just sitting there thinking, ‘What can I do?’

“I tried to stare at someone to communicate something was wrong, but people don’t like to be stared at in a mall. I couldn’t get someone to stare back. I wanted to fall on the floor but I couldn’t.

“After some time, an off duty paramedic from Alabama saw me and recognized what was happening and that I was in distress.”

Porter was taken to Nashville’s Skyline Hospital, where he stayed three days, then took a month off from his pastorate at Glasgow’s Immanuel Baptist Church.

His musical career was on hold much, much longer.

Porter had begun singing with a group while a student at Western Kentucky University in the early 1990s. He then joined the popular Joymakers quartet after graduating with a degree in broadcasting. He’d also been serving as a youth pastor at Scottsville Baptist Church and working in news-talk radio at Bowling Green’s WKCT, but the dream of a career in Nashville burned.

Brandon relocated, got a job in Christian radio, but his real reason for moving to Music City — “to pursue singing with a group” — never worked out.

A year later, Porter and his new wife, Monica, moved to Birmingham, where he pursued a Master of Divinity degree from New Orleans Baptist Seminary’s satellite campus. A Nashville connection led to a spot with an Alabama group, Chosen Witness, but when the seminary work was done, Porter and his wife returned to Kentucky in 2001, where he served two churches before winding up at Immanuel Baptist.

Brandon Porter singing at the Shepherdsville Opry in 2014. (Photo furnished)

“I thought I could sing and preach for a while,” he says with a bit of a smile.

The singing gigs included appearances at the Shepherdsville Opry, where he performed some of Johnny Cash’s top hits, and being asked by Orchestra Kentucky, in Bowling Green, to sing some classic country tunes by Cash and Tennessee Ernie Ford, singers to whom he has been compared. He’s also been told his voice is like that of Josh Turner.

And in 2009, Porter had been invited to sing at Carnegie Hall with an ensemble made up of singers from Kentucky, performing a show called “Appalachian Christmas.”

It all changed, ironically in Nashville, on that February day in 2015. While he soon regained the confidence to preach, but singing publicly just stopped.

“I think that my biggest side effect from the stroke has been an awareness to not exert as much, not to overdo it,” Porter says. “It’s maybe even to a fault sometimes. That is a struggle. The doctors have not told me to hold back. They have told me I am as free as a bird, but it is just a mental struggle and an emotional struggle.”

Eventually, some friends at Immanuel extended an impromptu invitation for Brandon to sing with them for a Sunday night service. Then after accepting a position with the Kentucky Baptist Convention in Louisville, Porter saw an ad in the Kentucky Farm Bureau magazine promoting the state fair showcase.

He made a demo tape in his living room and entered. 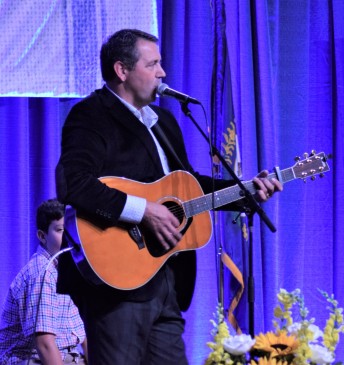 Brandon Porter sings at the Kentucky State Fair. His son, Jameson, in rear, played the cajon while Brandon sang. (Photo by John Herndon.)

“First of all, my 11-year-old son (Jameson) is an aspiring drummer. He played the cajon and it was something we could do together,” Porter explains. “But for me, personally, it was an opportunity to sing again.”

“I didn’t know what the competition was like or if I would be accepted or if I would even get to go to the fair,” he says. “I wanted to just do it and push myself.”

As it turned out, Tiffany Porter-Kennedy, from Olive Hill, Ky but is no relation to Brandon., won the soloist division but he was more than happy.

He survived performing for a crowd that practically filled a second floor conference room at  the Kentucky Exposition Center and the luck of a blind draw had him performing 10th out of 12 entries.

“It made me nervous that I was the only guy,” he laughs. “There were these younger girls (four) and this old guy. During the sound check, I was texting Monica, ‘There are some really good singers here.’”

Even though Porter was nervous — “higher than a cat,” he laughs — the knowledge that all of the singers were talented served as a reminder. “It just kind of reaffirmed you are not here to compete necessarily, but to honor the Lord,” he says.

Keep your hand upon the throttle and your eye upon the rail.

For his second song, Porter belted out, “Do Lord, Do You Remember Me,” a song that had the audience clapping and singing along.

“Since it was the Kentucky Farm Bureau competition, I thought a train song would be fitting. ‘Do Lord’ was something for Jameson. We all like to sing those songs we sang as children,” explains Porter, who has five children, ages 9 to 17.

Since August 22, Porter has been focused on his work as Communications Director for the Kentucky Baptist Convention, where he oversees the publication of the Western Recorder, KentuckyToday.com and all other denominational communications across the state.

And he’s singing again, picking up a few engagements after the fair.

“My life has been one of a guy who has struggled with his calling, because I have done a number of different things,” he says. “What I want is to be available to the Lord.”

Back on Aug. 22, he did just that, both singing and enjoying. “I was able to sit back and listen,” he says with a big smile, “and be thankful that we could sing songs about Jesus at the Kentucky State Fair.”

One thought on “Being available to the Lord”