I really wasn’t sure what to expect when I loaded the car Monday morning and headed to Pigeon Forge for the National Quartet Convention.

I had a sport coat and tie, just in case, but had mostly packed casual clothes. My 34 years as a sports editor had prompted me to pack my Dallas Cowboys’ windbreaker if the Leconte Center was like an icebox.  Thankfully, it wasn’t.

Set up and ready to go in the Media Room at the National Quartet Convention Monday.

I took two cameras and a backpack full of photography gear, more paper than I probably would need and, of course, a laptop, iPad and every other gizmo I could fit into a leather bag.

It was going to be my first trip to the NQC in about 15 years when gospel music’s biggest extravaganza was being held just up the road at Freedom Hall in Louisville. And, after some prompting from people who read this site, it was my first time working the NQC as a media member.

On top of that, it was my wife Stephanie’s first time attending the NQC for any reason.

Oh, I had worked big-time events in the past. I had worked numerous high school state tournaments, including a state championship football game and a girls’ basketball Final Four. I’d worked the NCAA Tournament and had interviewed athletes from Little League baseball players to college basketball stars to football Hall of Famers like Dan Hampton and Walter Payton.

But every event is different and, after working some concerts over the last few years, I also knew that working those events are much different than ball games.

What a privilege to meet and talk with Reuben Bean, of the McKameys. He was inducted into the Southern Gospel Music Association Hall of Fame Tuesday. The McKameys are retiring on Nov. 23.

And we had one of the most fun, but tiring, three days you could imagine.

We conducted six interviews, made countless contacts for the future — and some of those might multiply as much as 10-fold — and snapped well over 1,000 photos. Most of those digital images will end up in the recycle bin, but that’s OK. That’s pretty much the nature of taking action pictures on the fly. And we were able to tell others about the mission of KentuckySings.com, one that we believe fills a large void in a small way.

We renewed some old acquaintances and made new friends. We heard some of our favorite groups and heard some outstanding new ones. We attended the Southern Gospel Music Hall of Fame induction ceremony and later met Hall of Famer Reuben Bean, who is retiring with the McKameys on Nov. 23. While there, we connected with some very young talent trying to make their way in gospel music.

We had fun. Lots of fun, such as talking with Primitive Quartet’s Michael Riddle about Blueridge guitars. Let’s just say he plays one and I own one. That is about the extent of the similarities of our musical abilities! 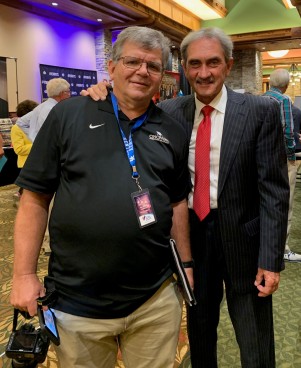 Michael Riddle, of The Primitive Quartet, talked about Blueridge guitars. He plays one on stage and I own one. That’s about the extent of our similarities.

During a break, my wife introduced herself to Gerald Wolfe’s wife, Donna and wanted to have a photo of them together because Steph like her hair. Really, that’s what they talked about.

And, of course, the Kentucky Wildcat-Dallas Cowboy blood that runs through my veins had to have some good-natured smack talk with our friend Bobby Carter, of the Jay Stone Singers, a die-hard North Carolina Tar Heel and Washington Redskin fan.

Most of all, we were enormously blessed.

Back in the days when I was writing sports, I was so focused on the game unfolding in front of me that I rarely had time to chat with those around me. Breaks in the action usually were spent reflecting on how to introduce the game story and what made the difference in the game. In Pigeon Forge, we were able to enjoy concerts and just talk with people for stories or future stories.

Oh sure, we had to pay attention. For example, during the final concert we attended at the NQC on Wednesday, an all male quartet session at 12:15 p.m., Triumphant Quartet joined Ernie Haase and Signature Sound on stage. That’s really not something

Stephanie Herndon, at right, had some fun talking with Gerald Wolfe’s wife, Donna, about hairstyles.

uncommon in gospel music, but the magnitude of the moment demanded a photo. Unfortunately, I never was able to maneuver for a quality shot. It happens.

But as I drove back home from Pigeon Forge Wednesday afternoon, I realized I was simultaneously tired but energized. I was looking at a daunting task to share what I had experienced, but looking forward to 2020.

And I was living the old saying, “If you’re not on fire after this, your wood is all wet.”

The National Quartet Convention will continue through Saturday, Sept. 28 at the Leconte Center in Pigeon Forge. Many gospel artists — soloists, duets, trios and quartets — will be performing over that time. For more information, see www.nqconline.com.

We opted to wait until returning home to prepare the stories and process photos from the NQC. Stories will be staggered over the next few weeks and photo galleries will be posted soon. You can know when they are posted by liking our Facebook page, Kentucky Sings.

From left, Emma Carter and Sharona Carter of the Jay Stone Singers, and Stephanie Herndon. We had met the Carters in the past at a concert and stay in touch with this exceptional family.

We ran into Lucas Vaught, of the Inspirations. A resident of Glasgow, Ky., we talked about our mutual friends and other connections even though it was our first time talking with this gifted musician. 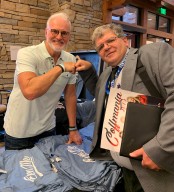 I had to fist bump Clayton Inman, of Triumphant Quartet, when I saw him on Monday. It’s a gesture tracing back to a Facebook post in which he was giving a virtural fist bump.

One thought on “NQC was all I expected and more”